The Miller Citizens Corporation (MCC) was founded in the spring of 1971, at a time of crisis for our city and our community. The entire Emerson neighborhood was up for sale, as black families moved into a formerly white area and existing residents sold out or just abandoned their homes. Many Miller residents were determined not to allow a repeat of this scenario in our community.

White and black residents came together in Miller to form a new community organization, which would work to make Miller a desirable neighborhood for the whole spectrum of people who chose to live here. The MCC, at first headed by a three-man presidency of Fred Eichhorn, Mose Dilts and Clarence Borns, has spent the past 50 years working toward original goals and interests, outlined below, as it responded to different challenges that came along.

In the early years, the MCC was challenged to demonstrate that white and black residents could live together and build a desirable community together on a friendly and cooperative basis.

To dispel unsettling rumors, we had the MCC "hot line" To discourage panic selling, we successfully promoted a ban on displaying "for sale" signs. To protect our commercial base, at a time when all the liquor outlets in downtown Gary wanted to move to Miller, we setup the Liquor Coalition, to fight any new liquor outlet in our community.

To make Miller a desirable place to live, we supported the formation and the expansion of the Indiana Dunes National Lakeshore. We even sent delegates to Denver to lobby in favor of the National Park expansion.

To protect the natural environment, we also fought against sand mining that would level our dunes, at a time when sand was in demand for highway construction.

To keep Miller looking attractive, we encouraged the city to enforce its zoning and housing codes, and we started the MCC community cleanups, which have continued for 35 years. We also developed some of the interests and activities, which we continue to cultivate: promoting public safety and education and working to keep our community clean.

In 1980, the MCC held its first Valentine's Day Dance, bringing Miller residents together to enjoy each other's company at a mid-winter ball. The MCC Dance has remained a highlight of the season in Miller. In 1982, the MCC organized the original Lake Fest - modeled after the "Taste of Chicago". We offered food from 24 vendors, free music, a beer tent, and other activities in Marquette Park. With leadership from Len Pryweller, Mike Chirich, and Paul Wengel, hundreds of people contributed their time and effort to making the event a success, and thousands of people came to enjoy the fun and to demonstrate that we could hold a pleasurable event in Gary at which all the people could participate. In the mid-80s, the MCC became an early proponent of Community-Oriented Policing (COP) and was the force behind the citywide COP organization. In time, the citywide operation faded away, but the MCC remained and continues to support community policing.

Our active education committee concentrated successfully on two specific goals: having text books for every student in every academic subject, and hiring a more dependable and affordable bus service to replace the Gary Public Transportation Corp. for bringing students to school.

The MCC supported the construction of the new Wildermuth Library on Lake Street, and tirelessly monitored the building process.

At this time, the local housing market began to recover, until it was thrown into another tailspin (in 1983) when US Steel dramatically reduced its employment.

During the Mayor Thomas Barnes administration, Gary stopped enforcing the prohibition of "for sale" signs, but by then it wasn't really needed, because panic buying and selling were no longer a problem, and race stopped being a reason for people to move in or out of the neighborhood.

In the mid-90s, a rise in the level of crime and some conspicuous criminal acts caused a great deal of alarm. The MCC was instrumental in getting Governor Bayh to send a large detachment of State Police into the city, to get matters under control.

Subsequently, the Gary Police Department adopted the concept of Community-Oriented Policing, which the MCC had long promoted. The MCC took on the responsibility of recruiting volunteers to staff the Miller COP office on Lake Street, which is still operating.

MCC members were instrumental in obtaining a lease on the former Marquette Park Bathhouse, which has been renovated as the Aquatorium, a place for meetings and celebrations and a landmark on the beach.

The proliferation of strip joints and the unsavory activities they fostered brought the Liquor Coalition back to life. The MCC successfully promoted the passage of an ordinance controlling strip clubs, but has not been able to get the city to enforce the new legislation. The MCC did successfully remonstrate against a number of liquor license applicants, whose licenses were not granted or not renewed. We have been represented at almost all meetings of the local liquor board since 2000.

In 2003, legislation at the state level brought on a property tax crisis for Miller residents. At the same time, Indiana changed the basis of assessing property and reassigned the responsibility for assessing our major industry - US Steel. The result was a huge shift of the property tax burden from industry to individuals, which was especially hurtful in Miller. The MCC saw this as a survival issue for our community. We created the MCC Defense Fund to fight for reasonable taxation. We challenged the constitutionality of the new property tax legislation and won vindication from the Supreme Court, but no redress for injuries. We talked directly with Governor Kernan, and convinced him to institute, through administrative action, the first property tax cap. We have continued to fight vigorously for reduced government spending and a reasonable distribution of the tax burden, and we eventually found allies in state government to continue and expand the property tax caps.

Where we are today

Although we are able to count many victories in the past forty years there is still a great deal of work to do to maintain and improve our lives in the Miller Community. To address the current needs of Miller we have formed ten working committees (see committees page). We utilize these committees to address City Government, Shoreline issues, Education, Zoning and a myriad of other things. Our Executive Board manages the committees and each has a Chairperson. Each MCC Board Member must actively participate in at least one committee. We welcome and encourage committee participation by the community at-large to assist us in maintaining this piece of paradise. We openly seek community involvement through board and corporation membership.

Today the Miller Community, which includes the Aetna and Glen Ryan neighborhoods, is a kaleidoscope of social, ethnic and economic diversity, achieving one of the founders many goals. To maintain and enhance our community we have adopted the following motto and mission "The MCC: Improving Your Quality of Life - Be A Part of It" 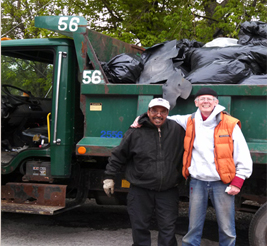